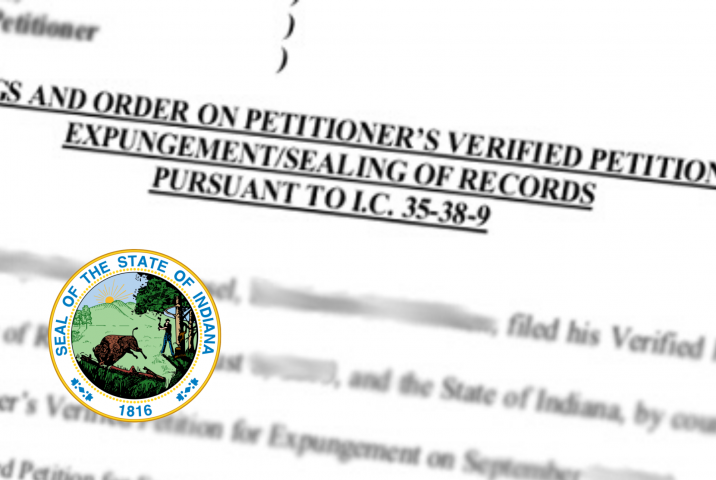 This is an interview on NPR broadcast from the Criminal Justice Collaborative that discusses criminal record expungements. The show also discusses how you can get an expungement for free in Indiana.

Here’s a startling figure – almost 1 in 4 American adults has a criminal record. That’s according to federal statistics. People charged with or convicted of even minor offenses can face consequences long after they have paid their debts to society. A criminal record can be a barrier to finding a job, a home or getting a loan. In the past two years, though, many states and cities have been passing or expanding laws to help restore rights. NPR’s Eric Westervelt has been looking into this and joins us now. Hey, Eric.

MARTIN: Can you just remind us of what the extent of the barriers are?

WESTERVELT: Yeah. Lawyers who work in this area say, look, you can’t underestimate, you know, how much a conviction, even for a misdemeanor – and the vast majority of convictions in America are for misdemeanors – can have this ripple effect and relegate someone with a record to a kind of permanent second-class status as they try to get their life back in order.

I mean, take the case of Jay Jordan. Jay served seven years in prison for felony robbery when he was young. He’s been out for nearly eight years. He’s completed his probation. He has no offenses, not even a traffic ticket. And he told me he still faces almost daily hurdles as he tries to get his life back to normal.

WESTERVELT: He now works for a nonprofit, Rachel, that advocates for the rights of the formerly incarcerated. And really, the question his group is asking is how long should these convictions be on somebody’s record, especially when people have done their time and want to move on and become good citizens.

MARTIN: So there are a lot of states that are trying to change this, right? I mean, my understanding, more than 20 states have passed some kind of laws or made changes to lower these barriers. Why is it happening now?

WESTERVELT: I think two things, Rachel, are driving this. More people on the right and the left agree that mass incarceration and the drug war has just clogged the courts and prisons, you know, and has hurt society and the economy. One study shows that unemployment among formerly incarcerated is 27 percent and even higher for African-Americans, over 30 percent.

Number two, I think the legalization of marijuana is a key driver here. Again, there’s, you know, this bipartisan sense that it doesn’t make sense that people are still paying a big price for something that’s now either legal or decriminalized in many states. And one of the most progressive laws that was passed is in Indiana, a solidly Republican state.

Barbara Brosher is a reporter with our member station WFIU in Bloomington. She’s part of NPR’s criminal justice collaborative, a new reporting partnership with some of our member stations. And Barbara looked into how Indianapolis is helping people who want a second chance. Let’s take a listen to her story.

BARBARA BROSHER, BYLINE: When Indianapolis residents with a criminal record want to turn their lives around, many of them end up in the subbasement of the downtown city county building. The long, gray corridor has concrete walls and almost resembles a jail, but people come to this underground room to escape their criminal pasts. Through one of the only open doors is a large, quiet room. Bold black letters on the back wall say, don’t look back. You’re not going that way. A young volunteer is helping a man fill out some paperwork.

UNIDENTIFIED VOLUNTEER: And if you don’t mind signing right there, right there.

UNIDENTIFIED VOLUNTEER: Are you turning it in today or tomorrow?

UNIDENTIFIED PERSON: Yes, if I can.

BROSHER: This is the Neighborhood Christian Legal Clinic’s Expungement Help Desk. They help people file petitions to expunge their records under Indiana’s Second Chance law, which legislators passed a few years ago. While it’s called expungement, it doesn’t actually erase arrests or charges. It just hides them from public view so they won’t pop up during a background check. That’s what kept happening to Latosha Poston before she came here for help.

LATOSHA POSTON: Sometime we get stuck on our past and let our past guide us.

BROSHER: She’s 44 now but ran into trouble shortly after she had her first daughter as a teen. She racked up a lot of arrests over the next two decades for everything from public intoxication to receiving stolen property. But long after she changed, Poston says the charges dogged her.

POSTON: I was asked to move from a low-income apartment because every year they do your re-certification. And I had, like, three theft charges and receiving stolen property, which in low income you can’t have that.

BROSHER: Poston says getting her records expunged helped her land a much better job in a hospital after working in home health care for nearly 20 years. She’s among thousands of people filing petitions under the Second Chance law.

The process appears pretty simple. You file a petition with the court. And for more minor offenses, it must grant the request to seal the record if it meets requirements laid out in the law. A judge has discretion with more serious felonies, and victims can give input. The prosecutor’s office reviews petitions and can object to sealing records. It helps that Marion County prosecutor Terry Curry advocated for the expungement law.

TERRY CURRY: If our goal is to have individuals not reoffend, then in our mind it’s appropriate to limit or remove obstacles that are going to inhibit their ability to become productive members of our community.

BROSHER: The process is time-consuming and costly. There are filing fees for every petition, and there are still plenty of people who don’t even know expungement is an option. That’s why Poston tries to tell everyone she knows about the help desk. It took her a couple of trips down here and 47 days of waiting before the state sealed her records.

MARTIN: Interesting to hear what a difference these so-called second chance laws can make in people’s lives. If there is, as you say, Eric, a lot of bipartisan support for these kinds of changes, why isn’t it everywhere?

WESTERVELT: Well, I spoke with an attorney who’s worked on this issue for nearly 30 years, Margaret Love. She heads the Collateral Consequences Resource Center. And as she put it, state legislatures are all reinventing the wheel here and not talking to each other. They’re not sort of sharing best practices or studying what programs have the best outcome. And defender offices that help people clear their records, they’re often, you know, overworked, understaffed and underfunded.

MARTIN: NPR’s Eric Westervelt. We also heard a report from Barbara Brosher of WFIU in Bloomington. She’s with NPR’s criminal justice reporting collaborative. Eric, thanks so much for bringing this to us.